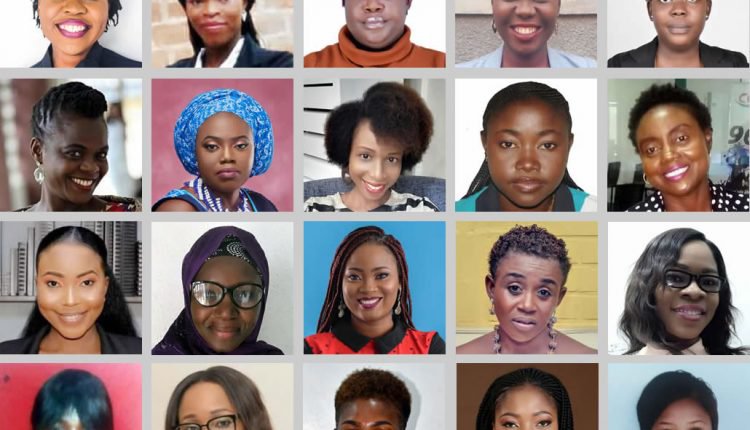 AMAKA OKOYE
Amaka Okoye is a broadcast journalist with PLUSTV Africa. One of her most exciting experience was emerging the top candidate in a one- minute radio piece on promoting peace in an International Radio Competition in Nairobi, Kenya. Her hobbies include hiking, reading a good book, traveling and nature walk. She is currently running her Masters at the University of Lagos on Maritime Administration and Management.

AZEEZAT ADEDIGBA
An Investigative journalist with the Premium Times Centre for Investigative Journalism, Azeezat Adedigba reports on humanity, injustice, education, governance and health. She worked as a broadcaster at Ice FM, University of Jos and NTA Jos. Azeezat was a recipient of the 2018 Tiger Eye Journalism Grant to uncover corruption in the health sector. She loves reading novels, writing and traveling.

CHIKA MEFOR
Chika Mefor is a journalist with Leadership Newspaper. Her investigative reports include stories about a community without water in the Federal Capital Territory (FCT), the abducted Chibok Girls and the insurgency in the northeast, which earned her an appreciative tweet from Jim Clancy, an American Broadcast Journalist. She has a Bachelor’s degree in Mass Communication from the University of Nigeria, Nsukka and loves writing, reading and singing.

ELFREDAH KEVIN-ALERECHI
A multimedia freelance journalist with Today 95.1FM, Elfredah Kevin-Alerechi uncovers societal ills and vices through community reporting. She is also a blogger and a data science journalist. She is an Ambassador of Accountability Lab Nigeria, a finalist of the 2019 SDG16 innovation challenge and a volunteer of 6 seconds and My Environment My Wealth. She holds a diploma, higher diploma and postgraduate diploma in journalism.

EMIENE ERAMEH
Women’s rights, social justice and African literature are some of the things that Emiene Erameh is passionate about. She is currently the Deputy Head of News at Nigeria Info FM in Abuja. She has experience spanning over 10 years as a writer for a community newspaper, News month Magazine in Jos, Plateau State. She is a member of the Nigerian Institute of Public Relations and holds a Bachelor’s degree in Mass Communication from the University of Maiduguri.

JEJE ANNETTE OYIZA
Jeje Annette currently works with DAAR Communications as a News Correspondent in Kwara State. She joined DAAR Communication as a reporter/news desk editor and gathered more media experience over the years. She is working on a Masters’ degree in Mass Communication and loves travelling, adventures, taking risk and exploring new challenges.

JOSEPHINE ASABEA AKONOR
Josephine Akonor is an online journalist working with Ghana businessnews.com in Accra, Ghana. Asabea writes on a broad range of topics such as health, gender, human rights, migration, and the environment. She holds a diploma in Journalism from Trans Africa College, in Accra and she is in her third year studying Communications at Wisconsin International University College, Ghana. She is a team player. Her hobbies include reading, writing, travelling, sightseeing, and movies.

JUSTINA ASISHANA
Justina Asishana is the Niger State Correspondent of the Nation Newspaper. Through her investigative report, “School feeding: Nice plan, sour product” she exposed some irregularities in the states’ school feeding programme. Justina is a Dubawa Fact-Check Fellow, a 2019 ONE Champion and an ICFJ Safety Fellow. Justina loves to read, write, travel, and train upcoming journalists.

LAMI MOHAMMED SADIQ
Lami Mohammed Sadiq is the Abuja Bureau Chief of Daily Trust Newspapers. She holds first and second degrees in Mass Communication from the University of Jos. She is passionate about journalism and her hobbies are reading and visiting new places. She has worked in the media for a decade. Lami has written general human-interest stories over the years.

MICHELLE AGOH
A broadcast journalist for five years and a graduate of Business Information Systems from University of Cape Coast, Michelle started her career as a radio presenter at HIT FM and Today 95.1FM. She studied Mobile Journalism from The Knight Centre for Journalism at the University of Texas, Austin, Presentation at the National Broadcast Academy (former FRCN) and is a trained PSA producer from the BBC Media Action. She features on Lagos spotlight Monday Breakfast Show and loves exploring the world of photography, makeup and fashion.

MODUPEOLUWA SHOREMEKUN
A reporter/news anchor at Silverbird Television with a passion for telling stories about the vulnerable, Modupeoluwa Shoremekun is presently a postgraduate student of Mass Communication at the National Open University of Nigeria and possesses a Higher National Diploma in Mass Communication from the Nigerian Institute of Journalism, (NIJ) Lagos. She is open to learning, honing journalistic skills and music.

NKECHI MACAULAY
Nkechi Macaulay is a broadcast journalist with over ten years’ experience with Federal Radio Corporation of Nigeria FRCN. She ran a media campaign/street rally to sensitise the public on the sexual abuse of the boychild tagged #boyslivesmatter and also conducted a workshop on “Single parenting” to help single parents navigate raising their wards. She holds a Bachelor’s of Arts degree in History from Delta State University Abraka, Certificate course in Presentation and Production and she is a Fellow of Radio Netherlands. She likes to read, dance, listen to music and practice yoga.

OMOBOLANLE ADESUYI
A presenter and producer at Impact Business Radio, IBR 92.5 FM and Impact Africa Television, IATV, Omobolanle Adesuyi has nine years’ experience in broadcasting. She is the Head of News at WomenFM 91.7 where she ensures balanced reportage of stories affecting women. She organises series of trainings for newsroom staff on the art of robust and unbiased news coverage, editing and reporting. Omobolanle is open to learning and a good team player.

OMOLABAKE FASOGBON
Omolabake Fasogbon writes for This Day Newspapers and reports general beat with interest in business, health and lifestyle interview. Prior to this, she had a stint at News Direct Newspaper where she covered technology and maritime. Omolabake holds a Masters,’ Bachelor and Diploma degree in Mass communication. She is an Associate member of the Nigerian Institute of Public Relations and her hobbies are gardening and travelling.

SHOLA SOYELE
A lawyer who currently works as a Supervising Reporter and the Judiciary Correspondent at Channels Television, Shola Soyele, is also the producer & presenter of Law Weekly. She is a member of the Nigerian Institute of Management, an alumnus of the School of Media & Communication of the Pan Atlantic University and a former Assistant General Secretary of the “Lawyers in the Media” group of the Nigerian Bar Association.

TESSY IGOMU
With interest in reading, writing and traveling, Tessy Igomu is an award-winning journalist with The Sun newspaper. She is a recipient of several awards such as the Sun Newspaper Best Investigative Reporter of the Year 2007 and Maternal & Child Health Award – Rotary International. Her passion for journalism recently earned her a chieftaincy title of ‘Adadioranma Ndigbo’ (Preferred Daughter of Ndigbo) in Lagos. She is a Mass Communication graduate from Nnamdi Azikiwe University.

TOPE OMOGBOLAGUN
A graduate of Ajayi Crowther University, Oyo State, with Bachelor of Science in Mass Communication, Tope is an investigative journalist at Punch Newspaper where she uses her writing skills to shape public discourse and push for societal development. Tope loves to read, engage in intellectual discourse, write and cook.

TIJESU ADEOYE
Though a graduate of Accounting, Tijesu developed interest in the media where she built a career path for more than three years. Her other interests are to learn new things, travel and interact with people. She works with Television Continental in Abuja and loves to do stories from interesting angles. Tijesu Adeoye believes in the capacity of female persons to run newsrooms and seeks to be one.

This site uses Akismet to reduce spam. Learn how your comment data is processed.