A picture, they say is worth more than a thousand words but in this digital age, it could also tell you a thousand lies and get spread across the net in the twinkle of an eye.

The severity of this and its implications cannot be over-emphasized, especially with respect to fake news. One of such occasions is the case of “Buhari of Nigeria vs Jubril of Sudan”, where even credible media houses in Nigeria became torn in the saga with different stories and articles.

Social media was not even at peace with the incessant picture comparisons being made regarding the President. At some point, a picture of Muhammad Bello commissioning the Abuja Rail line as the Minister of FCT was shared to suggest him as Jubril of Sudan.

Amid the tree-breaking wind, President Buhari refuted the popular claim that he was dead and replaced by an impostor while addressing some Nigerians in diaspora. It would be naïve to suggest or think that the President’s vehement denial of the claim would be enough to quench the wildfire. This is because there are still hundreds of pictures out there, tainting the veracity of the claim or at the very least, clouding sound judgment. Hence, the need arises for news consumers to be equipped with knowledge of how to verify whatever is being pushed out.

Little do people know that you can verify the authenticity or search for the source of images just like we do with words. Your search engine does more than just look up words but also searches images as well.

By “Image Search”, I’m referring to more than just the related images that are called up from a word search, but the ability to know the origin of an image and find similar images. This is called Reverse Image Search which is a major tool for Dubawa, used during the 2019 election and in several other fact checks.

Step by Step on Google (Desktop): 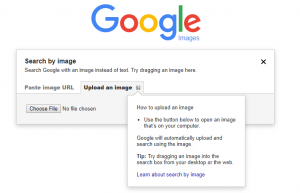 When images.google.com is entered on your mobile browser, it does not bring out the camera option but to get that you’ll have to enable the desktop view on your mobile device.

In chrome, check out for where you can find the three-dot menu (at the top for Android and bottom for IOS), Request the Desktop site. This will load desktop version and the camera option so you can upload the image from your gallery but some other browser like safari will give the complete desktop options.

However, there is a shortcut for both mobile and desktop provided you are using chrome browser. On desktop, right-click on the image you found online; while on mobile, you just must hold your finger on the image until a pop-up menu appears and click on “Search Google for this image”.

Step by Step on Bing:

Bing, the Microsoft Search Engine might not be the first option we employ in our daily transaction for internet usage but when it comes to reverse image search, it makes it easier than google.

Go to bing.com the camera icon is already waiting.

The same goes for Bing on Mobile especially with the latest version of its app where you choose the way you want to do the search either by picture, word or voice. The Camera Icon accesses the Gallery and make it easy to snap in case the image is in a hard format.

On the desktop, you will have to go to yandex.com/images to use the camera icon while the mobile looks almost exactly like Bing making it easy to search for images directly from the browser. The image search here comes with four choices:

Tineye, a leading application both on mobile and desktop has crawled over 34 billion images to date. It works on the desktop like other reverse image search engines with the three options of “drag and drop”, “upload” or “URL”. On mobile, instead of the camera icon, it uses the upload icon which is limited to 150 uses in a week… any more than that requires the paid version, which starts at $200 for 5,000 searches over two years.

Other mobile apps that can be used to verify images include Veracity (IOS only) and Search by Image (Android only) draws its result from Google, Tineye and Yandex.

However, the limitation to all these apps is that they can’t detect any image that hasn’t been on the webspace. Hence, the difficulty in deciphering images on WhatsApp because of the end-end encryption of the app. Also, screenshots of Twitter and Facebook images might be difficult because the meta-data (the background links/information/history) will be broken.