The Senator representing Kano Central, Mallam Ibrahim Shekarau and the Special Adviser to President Muhammadu Buhari on Media and Publicity, Femi Adesina, are among other eminent dignitaries that will be present at the 2021 Campus Journalism Awards, CJA, event.

Sen. Shekarau, a former Minister of Education and a two-term Kano State Governor, while confirming his attendance in a statement by his Media Aide, Sule Yau Sule, said he will be honoured to attend the event that will be honouring outstanding young journalists in Nigeria.

“It will be my honour to attend the glamorous 2021 Campus Journalism Awards,” Shekarau said. 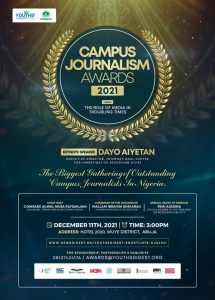 Speaking on the award, the Youths Digest Editor, Gidado Yushau Shuaib expressed delight with the fact that their annual CJA event has fostered the ‘spirit of competition’ among young, promising and courageous student-writers and broadcasters, who individually churn out award-winning reports, articles and investigative stories.

His words: “Our coveted CJA is the only platform and avenue that has consistently celebrated these brilliant lads.

“As campus journalists, they have been, through their explosive investigative stories and other genres of writings, remodel the face of the Nigeria media.

“Therefore, it is only appropriate that we roll out the drums to honour these exceptional writing and journalism prodigies, yearly.”

According to Mr Shuaib, the Executive Director, International Centre for Investigative Reporting (ICIR), Mr Dayo Aiyetan will be the keynote speaker at the awards’ ceremony. He will speak on, “The Role of Media in Troubled Times,” the event’s theme.

The 2021 CJA, which is slated for Saturday, 11 December 2021, in Abuja, initially received over 300 entries from campus journalists across the country.

The statement also revealed that the ‘Edirin Jerry-Wesley Best Student in Broadcasting Award’ was introduced to immortalise the late Managing Director, Nigerian Customs Broadcasting Network, NCBN, who was passionate about the growth of the media industry in the country.

The CJA event is hosted with support from CISLAC/Transparency International Nigeria.