Samad Uthman, a multimedia journalist with Dataphyte was adjudged joint winner of the West Africa Journalist of the Year award at the 2021 West Africa Media Excellence Conference and Awards (WAMECA) alongside Kwetey Nartey from Ghana. He speaks, in this interview, about his winning piece (published by The ICIR) which looked into how victims of the illegal trials of Pfizer’s Cerebral Spinal Meningitis vaccine on Kano children were yet to get compensation more than 20 years after. Excerpts;

How do you feel emerging joint winner of the best journalist award at WAMECA 2021?

It felt so great and rewarding. I least expected it. I was at first shocked to see my name on the overall winner shortlist. But it’s a great moment when you see a story that took your health, time and energy rewarded with an International award.

Actually, WAMECA is an award investigative journalists do hope to clinch annually, when I saw the call for application, I applied some minutes to the end of it. I didn’t take it seriously. When I got an email from WAMECA that I was shortlisted, I had to go search email for my submissions to remember the stories I submitted for the award. WAMECA is a big award for West African journalists and it feels great to bring it home, particularly being the first Nigerian to clinch that. It is a win for all Nigerian journos doing public interest journalism.

Did you at any point think you were going to win after you were nominated as a finalist?

For me, the shortlist itself was a win. Getting the award at the end was simply a dream come true and an attestation to my kind of journalism.

Your report focused on the illegal trials of Pfizer’s Cerebral Spinal Meningitis vaccine on Kano children in 1996. How would you describe your findings?

It’s meticulous and extensive. At the moment of my career, the story is the first most painstaking and demanding work I have written. I didn’t rush it, I took my time to fact-check everything I got from the source. I did this because I understand quite well that if I get anything wrong about this story to the public, even after my death, the wrong assertions will continue to live, and as a journalist with high regard for fact-checking and press freedom, I don’t joke with false information and disinformation to the public, I get my information right before pushing it to my editors.

What inspired you to carry out such a project on an issue that took place over 20 years ago?

It’s a serious story nobody wants to work on or discuss in Kano but I feel as a journalist, I have a calling that is putting a smile on the faces of people marginalised by the bad guys in government and corporate world.

I grew up on the street and understand what it means to be denied one’s rights. Like I said earlier, it was basically for the public good. 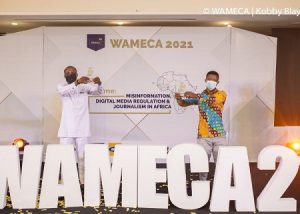 What challenges did you face while investigating and how long did it take for you to complete it?

As I stated earlier, it’s the first most demanding story in my career, I am working on the second most demanding work right now. While I was on the field, I was initially on my itinerary to spend four days in Kano. It was later extended to two weeks.

After the first four days on the field, my fixer and interpreter absconded. In between waiting for an eleventh-hour miracle, I got infected with malaria. I was sick and took injections for three days. I took the injections to my right arm and it got swollen.

On the fifth day, even after the injections, the arm was still swollen and I got a call from the Abuja office, my publisher, to meet a journalist.

With the swollen arm, I had to pick up my camera equipment and light, with every other thing I needed and mount it up. I still used the arm to carry these heavy loads.

The meeting was fruitful with the journalist I met and that’s the spark to the story. It took me a month to draft, and another one month to work on the documentary. I finished the story and it’s great.

What would you say are the impacts of that investigation on all stakeholders involved so far?

I was able to put faces to those behind the botched trial. A trial that they can’t conduct in their own country. A trial US authority forbade them to conduct in there. No one knows them in full. I opened their faces to the public. I am still putting up with the victims and the ultimate reward I aim for right now is the victims getting their entitlements.

In what way has winning this coveted journalism prize affected you positively?

Well, the reward of hard work and compensation like WAMECA is more work. I want to do more impact journalism. It is a calling and not a profession.

Did the COVID-19 pandemic which so many corporations have created vaccines for including Pfizer influence this investigative piece? How?

I did the story before the COVID-19 vaccine was rolled out. In fact, it was at the time everyone was anticipating a vaccine for the killer disease. The trials were still ongoing then and while I cannot say it influenced the story per se, the urgency to execute the story was influenced by the ongoing COVID-19 vaccine trials then.

Do you harbour any fears that Pfizer’s COVID-19 vaccine or any other will have such an aftereffect on the recipients?

So far, no adverse effects have been reported yet. We are still observing and it’s too early to conclude that there won’t be any or otherwise.

After this huge win, what’s next for Uthman Samad?

To do more great stories as I have always been doing with or without awards.