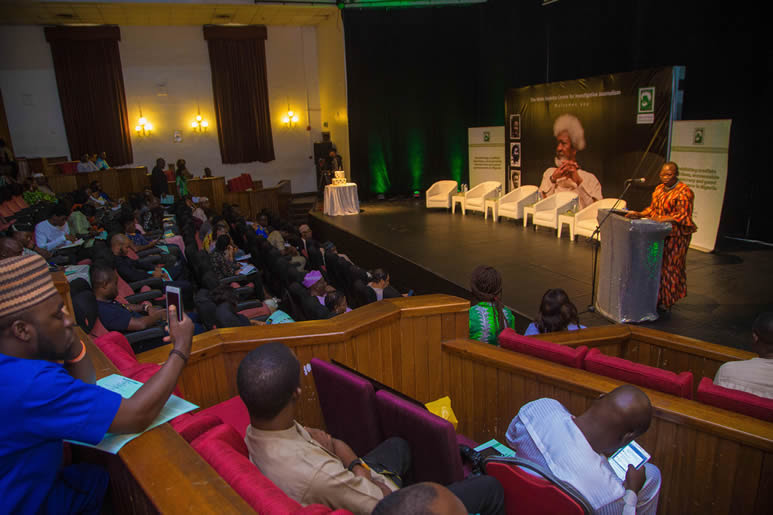 Obiageli Ezekwesili, Senior Economic Advisor, Africa Economic Development Policy Initiative (AEDPI) along with other speakers at the 11th Wole Soyinka Centre Media Lecture Series, held on Saturday, 13 July 2019 at MUSON Centre, Onikan, Lagos, have called on Nigerians to insist on values in determining those who become their leaders and how the polity is administered.

The former Nigerian Minister of Education and Minister of Solid Minerals made this call at the lecture held in commemoration of the 85th birthday of Wole Soyinka, Africa’s first Nobel Laureate in Literature and Grand Patron of the Wole Soyinka Centre for Investigative Journalism.

According to Ezekwesili, who was a candidate in the 2019 elections, good governance is rested on good values. In her words, “If we are lacking in the building of those values and the shaping of those values, then we will have to wait endlessly. The people who should win our vote should be people with values and character. Age should not just be the determinant of the people who should lead us; it should be age plus values.”

Oluwole Osaze-Uzzi, Director, Voter Education and Publicity, Independent National Electoral Commission (INEC) explained that the citizens should go beyond thinking and rethinking elections, to acting to see the change they seek. He urged stakeholders to begin to focus on the electoral process in terms of voter registration, technology and infrastructure, the registration of political parties and other determinants of successful elections.

The crucial issue of gender balance was introduced to the discussion by Amina Salihu, Senior Programme Officer, MacArthur Foundation who called for gender-based affirmative action in governance. She maintained that women have been “minoritised” because although they are half the population their voices have been diminished. Amina Salihu used the opportunity of the lecture to push for naming and shaming of sex offenders through the launch of a national sex offenders register which she assured will happen shortly.

Speaking of appropriate technology for elections, Gbenga Sesan, Executive Director, Paradigm Initiative, explained that technology hardly needs to be sophisticated and expensive. According to Gbenga Sesan, INEC should have sent text messages to its over 80 million registered voters when the 2019 election was postponed just a few hours before the 2019 Presidential elections. He charged the Commission to take advantage of technology to educate the technology-savvy new generation of voters including the additional 20 million-plus youth who will be eligible to vote by 2020.

Rotimi Sankore, Editorial Board Chair, Nigeria Info Radio Group, said the role of the media is to report factually and seek to educate and solve problems rather than add to it. According to him, the media needs to engage with data and evidence. Rotimi Sankore cited examples relating to conflicts in the northern parts of the country, health, education and the Rural Grazing Area (RUGA), of how the lack of in-depth reporting, verification of facts and deployment of evidence by the media have denied the people the opportunity to engage issues appropriately.

In his opening remark, Ropo Sekoni, the Board Chair of the Wole Soyinka Centre for Investigative Journalism (WSCIJ), organisers of the programme, mentioned that the lecture’s theme was topical given the insecurity that permeates the system. Kole Shettima, Director of the Africa Office of the MacArthur Foundation, who supported the lecture expressed the foundation’s excitement to be part of the occasion. He appreciated the WSCIJ for improving the lives of the citizens by making government accountable through investigative reporting.

The son of the celebrant, Olaokun Soyinka, thanked the WSCIJ on behalf of the family for the consistency that has brought the lecture to its 11th edition and its focus on promoting the culture of investigative reporting. He observed that Soyinka’s struggle to hold power accountable and fight against impunity are still relevant today and admonished young people to draw the battle line between those who are prodemocracy and does who are not rather than between the young and the old.

Motunrayo Alaka, the organisation’s Coordinator appreciated the speakers and panellists, the WSCIJ board, WSCIJ staff, her family, the media, Wole Soyinka and his children. She mentioned that it has taken the support of all the relevant stakeholders to keep the lecture on the same date, Wole Soyinka’s birthday for ten years.

The lecture was opened by a viewing of a documentary which chronicled the life, writings and the crucial role Wole Soyinka played for the emergence of Nigeria. It was moderated by Stephanie Busari, Supervising Producer, CNN Africa. It was attended by journalists, policymakers, representatives of pressure groups and non-governmental organisations, students and other members of the public.

This site uses Akismet to reduce spam. Learn how your comment data is processed.