By Roland Bayode — Owolabi Ajiboye prepares to barb the hair of a customer inside Legend Barber’s Shop. Since there was no electricity supply, he connected the shop’s main electricity extension box to an energy capsule he had rented.

A few minutes later, Ajiboye was already trimming hair of the customer’s head.

The energy capsule, he noted, “works for hours. It is always available when I don’t power my power generating set or when the set stops working.”

Power outage in his area is not a new phenomenon; it, however, did not stop him from giving the customer a new look just like Jubril Okesola of Kolak Aluminum who uses the energy capsule to power aluminium drilling machines whenever there is a power outage.

The lack of access to electricity is a deep-seated problem in Nigeria. About  85 million people – a little below half of the country’s 200 million population – do not have access to grid electricity, the World Bank says. This is in spite of the billions of naira allotted to the power sector in the country annually. Even those who are connected to the national grid endure blighting cuts that last many days and weeks, and, in some cases, months.

Poor electricity supply in Nigeria has not only affected people’s businesses but has also ravaged development and left ordinary citizens in underserved communities with the option of cutting down trees to make fires.

Nigeria consumes over 50 million tonnes of fuelwood annually, a rate which exceeds the replenishment rate through various afforestation programmes. Sourcing fuelwood for domestic and commercial uses is a major cause of desertification in the arid-zone states and erosion in the southern part of the country.

Illegal cutting of trees and the extensive destructive logging in many states in Nigeria has become so rampant that they have made the country fail in meeting its duties to tackle the climate crisis through forest conservation.

Timbers also face alarming threats from illegal loggers and this act could not be overlooked as some state governors placed bans on the unauthorised felling of trees by timber merchants.

Despite the associated challenges in the areas of cost and infrastructure, the adoption of renewable energy has further gained momentum as it helps reduce dependence on fuelwood, preserve forest resources and reduce environmental pollution caused by fire and smoke in many communities.

Climate change experts have also revealed that Biogas digesters provide a good alternative to cooking with firewood and kerosene stoves that deplete the forests’ resources and emit dangerous gases. This clean cooking technology is affordable as it is generated from waste products (e.g. the gas from household septic tanks).

Reeddi’s network and its services

Striving to fix Nigeria’s electricity problem is the goal of Olugbenga Olubanjo, the founder of Reeddi. In his drive to provide sustainable energy and affordable electricity to average citizens even at the grassroots level, he built Reeddi Capsules in 2017.

Olubanjo’s team developed a solar-powered energy capsule – a lithium battery – that can be rented and returned to be recharged at energy stations nearby. The capsules eliminate noise and fumes associated with generating sets. Over time,  over 600 households have been reached in southwest Nigeria, especially in Lagos, Oyo, Ekiti and Ondo States, said Olubanjo.

“We aim to sustainably build solutions that eliminate barriers associated with accessing critical and essential innovations—like access to electricity,” Olubanjo said in a recent interview.

One of Reeddi’s staff in Ikoyi Lagos State, Damilare Akinloye in an interview said the firm has over 500 capsules in Nigeria with some for sale and others for rent daily.

“We currently sell a Reeddi capsule for N150,000 ($360) which is reasonable compared to other power sources,” Akinloye said. “There is also an option to pay in instalments. Reeddi’s capsules can be used to power households, small cake businesses, television, fans, and lighting bulbs, while business owners like barbers, saloons, pharmaceutical stores, and supermarket stores can also make use of it to power their systems and gadgets.”

He added that the capsule works with both solar and electricity and that the total dependency for charging is not only on electricity.

It has gone a long way in solving the poor electricity dilemma and provides a tracker for greenhouse gas saved during use. Customers who save more gasses than others are rewarded by the company.

“We are hopeful that we will receive more. We currently sell a Reeddi capsule for N150,000, which is reasonable compared to other power sources,” he said.

While Reeddi was established with Olubanji’s scholarship award, he now sustains the project with money realised from investments, prizes and grants.

He hopes that the capsules will soon be produced in Nigeria with locally-sourced materials.

Speaking on challenges and how they manufacture the capsules, he said: “We design in Toronto, manufacture in Asia, then sell in Nigeria. Hopefully, we start manufacturing in Nigeria soon, but there are a lot of challenges surrounding that. We have to source batteries and other equipment outside Nigeria. Presently some of the things we do in Nigeria are packaging and printing to complement the other things we cannot do there.”

A trader in Oye-Ekiti and one of Reeddi’s Capsule customers, Kemisola Owonikoko who appears to be between the age of 30 and 35 years said the Capsule has helped fill the void created by electricity challenges in her area.

“I was in my workplace when someone came to introduce Reeddi’s Capsule to us. He has a shop where he rents the capsule out to people at the rate of N250 ($0.6) daily.

“There is no harm in trying, so I tested it and it was awesome. I use Reeddi’s product because we are battling with a low voltage of electricity supply at my place in Ekiti State but this product has helped in diverse ways when it comes to solving the hurdle of electricity challenges,” Owonikoko said.

She added that she has been using the product to charge her phone, lamp, and other chargeable items at home. “I don’t have to bother paying to charge my phone and items with an outrageous fee any longer,” she said. 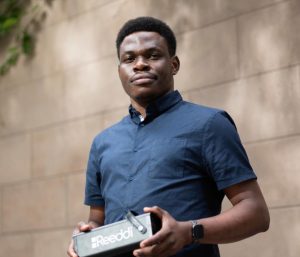 Another customer in Ondo State, Akadri Abass, noted that poor electricity has been a major issue in Nigeria for years with no permanent solution.

He said: “Reeddi’s product has shown that Nigeria’s electricity problem can be fixed but, we don’t know why things are happening the same way annually. It is unfortunate that despite all (our) resources, we still live in darkness as a country.

“I’ve been using Reeddi’s product for a while now and it helps me in charging my gadgets, powering the house for light and other things.”

Despite showing prospects of bridging energy demands and gaps, Reeddi’s circulation of renewable capsules is limited to some places in Nigeria. The team disclosed that its capsules are not available in all states in the country. In some of these unreached communities, they still depend on fuelwood and other polluting sources of energy.

A researcher on climate/land use dynamics and conflicts, Dr Chukwudi Njoku, told this reporter that the high dependency on firewood and charcoal in Nigeria is largely due to the poor access to electricity among the underserved population.

“Lack of access to electricity or its high cost keeps fewer fossil-fueled Nigerians in darkness. This means they have to look for alternate power sources,” he said.

While he affirmed that firewood and charcoal are easy to get and more affordable, especially for the large rural populace, he noted that it feeds deforestation.

Renewable energy from sources like solar and wind are available and sufficient in Nigeria, but some level of technology to trap and convert these energy sources into electricity has been a matter of concern.

Dr Chukwudi, in his suggestions, urged that the government should make electricity available and affordable, especially in rural areas where people rely on firewood for cooking.

“The Nigerian government must prioritize transiting from fossil-fueled energy to renewable sources. One way to do this is to remove the tariffs on solar energy products.

“They should make policies that will ease the access to solar energy while also supporting initiatives that champion energy sources for cooking, like biogas,” he said.