News Ticker
Abdulhaleem Ishaq-Ringim, a first-year student of Economics at Ahmadu Bello University(ABU), has emerged the Campus Journalist of the Year during this year’s Campus Journalism Awards, CJA2021 organized by Youths Digest.
Mr Ringim, who also bagged the Best Syndicated Writer Award, emerged winner of the coveted prize after beating fellow campus journalists from several top tier universities across the country.
A 22-year-old writer and public affairs analyst, Mr Ringim who hails from Zaria, Kaduna State is now the first person from the state to have ever won the overall campus journalism award. 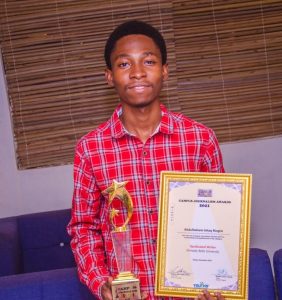 During the award, held in Abuja on Saturday, the Director-General of the National Information Technology Development Agency (NITDA), Kashifu Inuwa Abdullahi was recognized with the Outstanding Personality Award (Public Sector).
Also honoured during the event, Muhammed Idris (Malagi), the Founder and Chairperson of Bifocal Group and Blueprint Newspaper was recognized as Outstanding Personality (private sector), while Mallam Saliu Mustapha, the Turaki of Ilorin Emirate went home with an award as the CJA 2021 Philanthropist of the Year.
Dr. Sanusi Mohammed Ohiare, the Executive Director of Rural Electrification Fund, and Dayo Aiyetan, Executive Director of International Center for Investigative Reporting, ICIR, were also honoured as Honorary Patrons of the CJA.
Speaking during the event, the Executive Director of the Civil Society Legislative Advocacy Centre, CISLAC, Auwal Musa-Rafsanjani, called on Nigerians to join efforts in building Journalism students.
According to him, doing so would contribute positively towards strengthening democracy and accountability in the country.
He said: “We need leadership recruitment at all levels and part of the governance challenge we have in this country is because we have lost touch with our young people especially in mentoring them and giving them the necessary skills and encouragement to do the right thing.”
Earlier in his keynote address, the ICIR Executive Director, Dayo Ayetan, stressed the need for the media to hold government institutions and officials accountable.
Speaking on ‘The Role of Media in Troubling Times’, Mr Ayetan said: “Educating the public is one of the foremost roles and educating the public means that we have to go beyond the surface.
“Part of the failing of the media in Nigeria today is that our reports don’t have depth, background, analysis, context, those are the things that we have to use in educating the public.
“Our country is facing a lot of crises and we know that it is in crisis that political division, all kinds of fake news, people who profit from chaos, that is when they thrive and it is the duty of the Journalists, of the media to enter the fray and provide the perspective of the truth.”
In his remarks during an appearance on Arise TV, the Convener, Gidado Shuaib, said the award is aimed at supporting young writers and promoting excellence in the journalism profession.
He said: “The challenge most young journalists face these days is that a lot of them want to start young but they face many challenges, especially with the fact that everybody is now a citizen journalist.
“People no longer follow the process of learning journalism from the scratch, once you have your social media accounts you just jump into posting what you want.
“It was on that basis we came up with the Campus Journalism Awards and Dialogue where we recognize and empower young and upcoming journalists from various institutions across the country,” Mr Shuaib said.
Various winners of the Campus Journalism Awards categories are: Hamzat Mariam –  Features Writer of the year from Ladoke Akintola University of Technology; Oluwatosin Ologun – Edirin Jerry-Wesly Best Student in Broadcasting from Adekunle Ajasin University; Abdulwasiu Olokooba [The News Digest Press, UDUS) – Editor from Usman Danfodio University; HERALD Magazine –  Print Magazine from Adekunle Ajasin University; Gbolahan Latinwo – News Reporter from Obafemi Awolowo University and Oluwatobi Odeyinka – Investigative Reporter from the University of Ibadan.
Other winners of the CJA2021 award are Prince Innocent – Social Media Influencer from Federal University Utuoke; Muhammad Auwal  – Photojournalist from Ahmadu Bello University; UCJ UNILORIN – Pen club from the University of Ilorin and Nwobi Chidubem – Book Author from the University of Nigeria Nsukka.
Also recognised were: Oluwuyi Fasilat – Gender Equality from Moshood Abiola Polytechnic, Abeokuta; Sanni Omolaja- Entertainment Writer from Lagos State University; Hassan Abdulsalam– Sports Writer from Moshood Abiola Polytechnic and Uchenna Igwe – Upcoming Writer – University of Uyo.

DEADLINE: ROLLING —The International Center for Journalists (ICFJ) invites applications for the role of a communications intern. APPLY HERE