Following their undercover reports which exposed ills in the society, investigating journalists, Fisayo Soyombo and Kiki Mordi have been awarded the People Journalism Prize for Africa 2019 (PJPA).

The duo received award plaques and a prize of N500,000 each at the award ceremony held in Abuja on Thursday.

Recall that Gatefield, the organisers of the award, earlier in the year, announced Soyombo and Mordi winners of the maiden award which seeks to recognise and reward journalists and citizen reporters within Nigeria and sub-Saharan Africa, whose work have resulted in meaningful positive impact on the society.

Mordi was selected for her investigation into the horrid web of sexual harassment on university campuses in West Africa.

This resulted in widespread disciplinary actions and policy reforms across the institutions that were exposed by her thorough reporting of the events.

Soyombo was selected for his investigative series that exposed the entrenched nature of corruption within Nigeria’s criminal justice system.

Soyombo spent about two weeks in detention as a “criminal” to bring these stories to the Nigerian public. His report led to the announcement of an official investigation by the Nigerian authorities.

While receiving the award, Soyombo, said he will donate the N500,000 cash prize attached to the award to help in the release of inmates awaiting trial.

He said the fund will also pay for the services of lawyers who would track the cases of the inmates and see to their eventual release.

The fund, according to him, would be managed by The Justice Project (TJP), a social initiative of a Lagos-based church, Ecclesia Hills.

Soyombo said: “I like to announce that I am donating the N500,000 cash reward to The Justice Project (TJP), a cause for the release of awaiting-trial inmates who have no business in prison. And, trust me, there are scores of them. My three-part investigation may have focused on the deep-seated corruption tarnishing the administration of criminal justice in Nigeria, but that isn’t the only frailty of the system.

“One other is the huge population of awaiting-trial inmates, many of them actually in prison for trivial offences and others not even deserving of detention much less imprisonment in the first place. At Ikoyi Prison, for example, more than 3,000 inmates inhabit a prison built for 800. Of these 3,000, less than 500 are convicts; the number of awaiting-trial inmates usually hovers around 2,500.

“While I am not in a position to help the prisons service clean up its corrupt house, by donating this money, I can at least help to kick-start a process I’m hoping can snowball into prison decongestion through the freedom of scores of awaiting-trial inmates.

“The funds, to be managed by TJP, will be used to pay stipends to lawyers who will visit prisons to track the cases, ensure more inmates have their days in court, represent the inmates, settle fines where necessary and provide support to the inmates.

“Aside focusing on the possibility of innocence and frivolity of cases against inmates, women with babies and inmates with young families back home will receive special consideration. 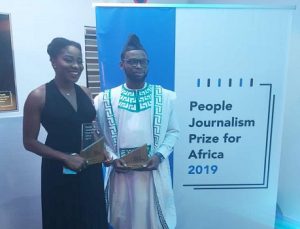 “I like to thank two of my former bosses, Mr. Simon Kolawole, CEO of TheCable, and Mr. Dayo Aiyetan, the Executive Director of the International Centre for Investigative Reporting (ICIR), whose newspapers co-funded the story, and who have both been integral to the evolution of my career in recent years.

“I am grateful to those who housed me interchangeably when I went into hiding in October following the threat of arrest, and those who’ve done it afterwards, as I live more or less like a fugitive these days. To have housed a wanted man is the height of friendship and belief in what I do. I cannot mention your names but you all know yourselves. Thank you!

“I’m also grateful to all those who have supported my work for ages — the likes of Dr. Laz Ude Eze, the man who convinced me to join the campus press in my first year studying Agriculture at the University of Ibadan; Mr. Jahman Anikulapo, my first mainstream newspaper editor who has now become my mentor; Mr. Omoyele Sowore, Publisher of SaharaReporters and my immediate past boss and, of course, my family. Specifically, I thank my father, my hero, the biggest exponent of the values and ideals that define my work, and my mother, whose fearlessness resides in my spirit.

“On October 22, 2019, my mum sent me a Whatsapp message asking God to bless me with ‘good health and long life’. What she didn’t know was that she sent that message hours after I found out about the meeting where my arrest was first mooted. That’s the kind of mother I have, a prayerful woman. 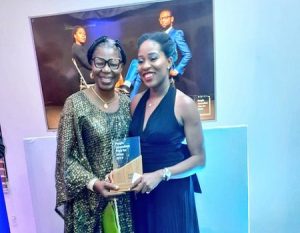 “To have housed a wanted man is the height of friendship and belief in what I do. I cannot mention your names but you all know yourselves. Thank you! Today’s announcement is only the first of two; the second will be revealed in the next few days,” Soyombo said.

Mordi, in her acceptance speech, thanked her team who assisted to carry out the #SexForGrades investigative report on Ghanian and Nigerian universities.

She said in part: “I thank my mother who has been there since my father died in 2002. She was there for all four of us. She was there for us even when I was facing harassment in the university. She told me ‘come home. I’d rather have my daughter’. And that is why I’m standing right here today.

“When I dropped out of school, I never imagined it was going to go this way. Thank you to Gatefield for this, I will never forget. It is literally the first prize that I’ve won ever.

“I think is it important for journalists to win actual money because when it comes to money, the integrity of a journalist is always questioned,” Mordi added.

In his keynote address, Head of Nigeria Office of the Open Society Initiative for West Africa (OSIWA), Jude Ilo, said: “At the time Nigeria needed to find its footing, it was these journalists that gave us our voice, they are the ones who amplify our voices.

“The price of freedom and the work of journalists is very grave and we should never take it for granted. For you to keep doing this work, it requires the collective appreciation of Nigerians.”