The even held at the just concluded Africa Conference on Development Journalism in Kaduna, Nigeria from 10th to 12th of December, 2019.

During the Award ceremony on 10th December, Venessa Offiong of Daily Trust emerged the AMDF 2019 Journalist of the Year for her story entitled “Abuja Communities Where Girls Are Raped En route School”.

Programme Director of Development Communications Network (DevComs) Lagos, Akin Jimoh, was honoured with a Lifetime Achievement Award for his immeasurable contribution to promotion of development journalism in Nigeria. 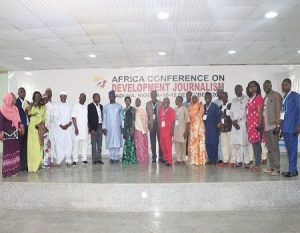 Pathfinder International was also presented with the Stand out Performer Award for its contribution in the training Nigerian Journalists on family planning, a key component of the Sustainable Development Goals (SDGs).

The winner was presented with a plague and runners-ups received commendation certificates.

Speaking, Chairman of the panel of judges of Award, Joseph Edegbo who is also the Managing Editor of Africa Prime News said, the panel revived 25 entries, out of which it shortlisted three as finalists, encouraging other journalists to always go in-depth in their stories.

“The entries were assessed to know whether they were ethically or professionally written to which ratings were decided arising from these attributes; headline, story idea, news value, thematic richness, investigation & research inputs, and balance,” he said.

Also speaking, Executive Director of AMDF, Iliya Kure, congratulated the finalists for putting their best to bring stories that matter to the common man. He also congratulated the honorary award recipients for their work in promoting development journalism.

He tasked journalists to be resilient in their work of “holding power to account despite the challenges faced by journalists in Nigeria and around the world,” adding that “journalism is not a crime.”

In a closing remark, Chair, AMDF Board of Directors, Dr Yila Umaru, expressed appreciation to panel of judges and guests tasking journalists to promote stories that will enhance the wellbeing of the common man.

Umaru said, “it is only when you highlight issues around the common man that intervention will come in that direction.”