By Abibat Tijani ― Local charcoal production is one of the lucrative businesses residents of Alaagba area of Ibarapa South Local Government of Oyo State have begun to venture into following the hike in price of gas and kerosene.

As this reporter journeyed into the Alaagba forest through a narrow and hilly road in the early hours of Saturday, the only sound heard came from the top of a mountain where a Chinese Quarry company is located at the extreme portion of the forest.

From Igboora, it took almost two hours before this reporter could arrive in the forest with the aid of a motorcycle. Hardly a minute passes without a truck loaded with stacks of charcoal commuting through the road.

Trees in the forest of over 20 hectares of land are being indiscriminately cut down to produce charcoal. Not only that the charcoal production process has led to deforestation, it is threatening the existence of natural resources in the forest and also causes huge loss of revenue for the government. 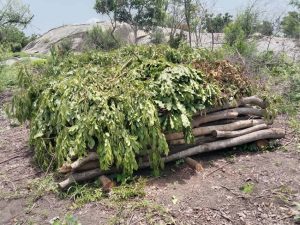 To the charcoal dealers, felling trees in the forest is the only means of survival but environmentalists say it is a crime against nature.

Engaging in an unchecked illegal felling of trees for production of charcoal is against the forestry law of Oyo State which prohibits cultivation of farms or plantations in the forest.

The Director-General of the Nigeria Conservation Foundation (NCF), Dr Muhtari Aminu-Kano, reported that Nigeria has lost over 96 percent of its natural resources in the forest to deforestation.

“It is sad that we are losing vegetation cover and there is absolute need to make concerted efforts to grow more trees because the more the merrier not only in Oyo but across the country,” he said.

‘We engage in indiscriminate felling of trees to survive’

Mr Sunday Mate, one of the charcoal dealers in the community told this reporter that they engage in indiscriminate felling of trees in the forest because they needed to survive.

Mate who was found arranging trees that he had fell from another forest lamented that they usually travel a 15-hour journey to Owere-Shamo, another forest within the state to get trees.

“There are no good trees here again. People have fallen the useful ones, they have used them to produce charcoal. If you see people cutting down trees here, it will be those small trees and that one will not make good money.

“We go as far as Owere Shamo to get trees. We usually get bigger and better trees there because that place is still okay than this place. We spend over 15 hours on the road. If you go now, you won’t come back until tomorrow morning,” he said. 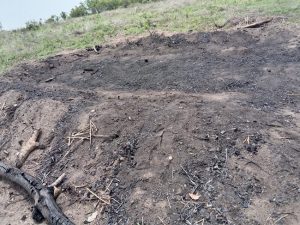 Joel Oguntoyinbo, another charcoal dealer within the forest said himself and his colleagues in the local charcoal business usually pay some people who claimed to be owners of the forest.

Oguntoyinbo explained that the ‘omo oniles’ do not have a fixed amount, noting that the  amount was usually measured based on the numbers of trees the dealer wants to log in the forest.

“We pay ‘omo onile’ before we fell the trees. They claim ownership and we usually settle them each time we want to fell trees.

“It does not have a fixed amount, it depends on the number of trees that a particular dealer wants to fell.”

One of the dealers who does not want his name in the media, told this reporter that their truck drivers usually offer bribes to security personnel stationed on the highway.

The bribes, according to the dealer would, help the driver transport charcoal freely on the highway without any hindrance.

When asked the amount the driver pays to the security personnel on the highway, the dealer said “it depends on the truck, if it is small, soldiers will collect N1,000, if it is a big truck, they will collect N1,500. But the police do collect between N200 and N500 from them.”

Charcoal production is profitable but we need government assistance 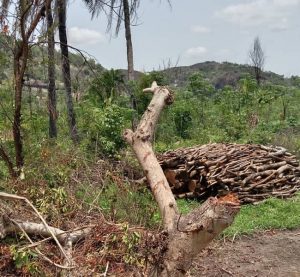 Oguntoyinbo, while speaking on his proceeds from the charcoal production, hinted that the business is lucrative.

He said they made more profits during the rainy season because they inflate the price.

The charcoal dealer, however, called on the government to help them with modern equipment.

“We are not aware that we are affecting the forest with our business. The government should provide another means for us if they know we are damaging the forest.

“It is a good business and we are making profits. We usually make more profits during the rainy season. Before, we sold a bag at the rate of N1,800 but presently we sell at the rate of N3,000.”

Opeyemi Elujulo, an environmentalist has warned that the indiscriminate felling of trees in the forest for the use of charcoal is capable of leading the nation to what he described as total deforestation.

Elujulo who was an executive member of Agriculture Restoration noted that illegal felling of trees could also lead to migration of wildlife animals.

The environmentalist called on the government to offer alternatives to the local charcoal dealers, rather than indiscriminately felling trees in the forest.

“So many of these animals do not have a place to call home again, they are either forced to migrate or forced into extinction, if they cannot cope with the new environment, they find another place themselves,” he said.

He further added that the government should also provide an alternative means of livelihood instead of telling them to stop. 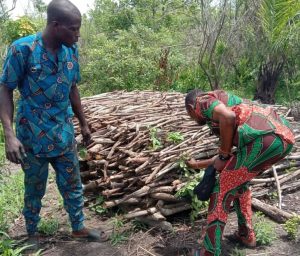 “Subsidised alternative or renewable energy sources will enhance adoption and shift the gaze of people from using charcoal, currently the price of cooking gas is on the high side, and even kerosene is also high. If the demand is not there, production will greatly reduce, but as long as the demand is there charcoal production will continue to rise,” he said.

The environmentalist also called for collective efforts from the stakeholders to put an end to illegal charcoal production while calling for public education and enlightenment among the youth and others on the need to plant trees and shun the activities that endanger climate and deforestation.

He said: “The need for further education and awareness on the need for forest conservation, the essential ecosystem services that forests provide for human’s survival, the impact of forest degradation, and the effect of inhalation of the combustion smokes on health and wellbeing in charcoal producing communities.

“Also, in the formulation of policies and making decisions relating to abating this, members of concerned communities should be included in the process, else policies and decisions might not be reflective of what might motivate them to stop. But when they are included, then they will be able to give voice to their desires and need-based interventions and policies will be formulated.”

This report was sponsored by I-79 Media Consults under the ‘Rewriting the Narratives of Environmental Crimes in Nigeria’ project which is supported by the Environmental Reporting Collective (ERC).